I spent the afternoon raking leaves.  I only watched a bit of the fourth quarter of the game where the Philadelphia Eagles served the New York Giants  a platter of buses.  The Eagles won 40 to 17.  Get game summary, stats, and play-by-play here.

I watched Big Fan (Robert D. Siegel, 2009) a couple months ago and reviewed it for FilmThreat. 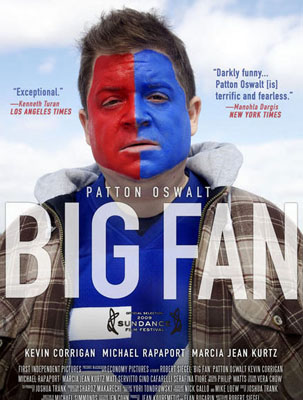 Don’t let the premise of “Big Fan” mislead you. Writer-director Robert D. Siegel’s 2009 Sundance-approved dramedy indeed examines the fall-out of a hematoma-induced encounter between New York Giants fan Paul Aufiero (Patton Oswalt) and his favorite player Quantrell Bishop (Jonathan Hamm), but it’s not a football film. It’s not even a sports film. “Big Fan” is more accurately a romantic drama about loyalty and unconditional love that elects a Giants fanatic as its messenger…

1.  Paul writes down his phone rants—his passion is thought-out.  He has a mobile phone but no regular or easy access to the internet.  This (conspicuous) absence of online activity is consistent with his character—he drives a mid-90s red Toyota Corolla—as well as the film’s grainy visual design, which gives the film a sense of timelessness.

2. NFL paraphernalia (particularly of the Giants and Eagles sort) is prevalent throughout the film, yet there is no game-play to be seen.  Paul and Sal listen to a couple of games on the radio and watch telecasts at the stadium, but the viewer is not privy to a single image from it.

3. My favorite line in the film: “There’s no way we can lose, not with us in the parking lot.”