Times are bleak, indeed, they are,
some may remind,
“when have times not been bleak for at least one person in the world?”

Don’t remember, but the good moments
persist nonetheless
in the forms of art
conversations with friends
cat videos
animals being bros.

Don’t believe everything will work out
one way or another?
That’s okay.

Some of us have all
the time in the world,
some of us only have today.

So forget about your worries
for an hour,
give or take.

The above poem was inspired by knowing that this documentary about Hong Kong singer and actress Denise Ho exists and a Ted Talk she gave at the end of 2019.

The doc hasn’t come to streaming to any of my local theatres yet via Kino Lorber‘s Kino
Marquee initiative, but if it has come to one of yours, please consider watching it.

Now for some humor.  Roy Wood Jr. has brought so many smiles to my face in the last several months.  He doesn’t shy away from serious topics.

And now for the crushes.  Each of these podcasters have experience in the Kpop industry.  Ashley was in Ladies Code; BM was in KARD; Peniel was in BTOB.

In the last act of Moana (Ron Clements and John Musker, 2016), the title character (Auli’i Cravalho) is trying to instill confidence in and convince demi-god Maui (Dwayne Johnson) to complete the final portion of their mission and return the heart of Te Fiti.  To Moana’s dismay, though, Maui refuses because his most recent rumble with the lava-breathing Te Ka resulted in significant damage to his fishhook.  “Without my hook, I am nothing,” Maui repeats, his voice growing louder and louder until Moana has no choice but to continue on her own…after some coaxing from the ocean herself.

Maui speaks those words, “without my hook, I am nothing,” with such conviction it made me wonder about the way weapons, tools, and other accessories serve deities and other entities with magical powers.  Talismans, spellbound charms, various jewelry, capes, helmets, swords, knives, shields, shoes, means of transport, and even hair — all of these “things” can either define or accentuate a character’s abilities.  Depending on the lessons a story is supposed to teach, the amount of power that resides in the objects themselves and how much is in the individual mortal or immortal will fluctuate.

Witches and wizards may not need a wand, herbs, blood, candles or cauldrons to cast spells, but tools can only help focus their intentions.  Captain America may not need the full outfit, but I’m pretty sure he needs his shield to be most effective.  Batman certainly needs all his toys.  How successful would Sam and Frodo have been on their journey to Mordor without the invisibility cloak?  Same goes for Harry Potter and his invisibility cloak, gifted to him by an unknown source.

Belief in one’s own power is paramount in the evolution of many heroes and heroines for humans and superhumans alike.  There’s a Buddhist teaching in that concept, n’est-ce pas?  Your weapons and magical objects can be taken from you, so you have to rely upon your own wits and brute strength when the time comes.  If it is your destiny to see the end of your trials, you won’t need those things after all.

I saw Moana twice at the movie theatre.  The animation was splendid, I loved the music, and really liked the premise.  I wasn’t a big fan of Maui and even after watching it on DVD a couple more times, I didn’t pay that much attention to his character, so I was somewhat surprised when he made more of a meaningful impression on me today, this first day of July.

What would it look like?  What would it feel like for animals to want to save and care for us the way Dame Daphne Sheldrick did with African elephants?  Would we even know it was happening if the animal wasn’t a dog, a cat, a horse, or a beloved farm animal?

I’m not crying, these aren’t tears, the wind is just blowing too fiercely across my face.

I am thankful for Dame Daphne Sheldrick, a woman whom I’ve never met but cannot imagine this world without her in it.

Hakk-Saul sat down on the bench to tie his shoes.  His throat was sore from a fit of screaming that took place on the drive down to the stadium.  Ordinarily, he went to home games by himself because he liked to clear his head while driving (and listen to music he wasn’t ready to let anyone know he liked).  Today was different; Hakk-Saul did a favor for the defensive coach and gave the team photographer a ride.  There were car troubles and the photographer was on the way.

Hakk-Saul took the usual route of surface streets, an access road, and more surface streets.  Afternoon traffic was beginning to bulge but he was used to it and wasn’t bothered by waiting.  He wasn’t bothered at all until the pine green bread cart of a car sped in front of him and into the turning lane where he was already queuing.  The head coach had been urging Hakk-Saul for half the season to let the anger flow, to let all the rage gush out like lava from an erupted volcano, and to burn everything in its path — he had to protect the quarterback.  Hakk-Saul didn’t like summoning that kind of energy because it seemed insincere.  Besides, he’d forgotten how it felt to be angry.

Seeing that green car behaving in such a ludicrous manner bit into Hakk-Saul’s psyche, though.  There was no room for him to follow the four cars who’d turned before him and yet here was this idiot zipping by as if it was going to make traffic move any faster.  Hakk-Saul waited twenty seconds before turning onto the on-ramp, occupying the space to the right of the green car.  At that point, he’d forgotten the photographer was in the back seat.  Hakk-Saul’s attention was focused solely on that idiot car.  He turned and stared into the childish, grinning face of its passenger and merged into the ramp behind it.

Creeping down the on-ramp half a car-length every couple of minutes, Hakk-Saul changed the music from progressive house to melodies with vocal screeching, heavy percussion, and shrieking guitars.  With dark brown sunglasses resting on his sweaty face, Hakk-Saul glared into the green car’s side mirrors.  He dropped his lower jaw like a draw bridge, bared his teeth, and growled.  In a matter of seconds, his raspy exhalations became a crescendo of an unholy, guttural orchestra.

His hands shook, his face trembled, his heart rate spiked and for the next quarter of a mile, Hakk-Saul thought of nothing but ramming into that car, its occupants tossed around like fish by giants, heads crashing into stone, faces lacerated by cenobites, and limbs torn asunder by enormous spider crabs.  All the while, the photographer was sitting in the back as still and quiet as paint drying on a wall, neither seen nor heard…just barely smelled.

Hakk-Saul’s fury passed on through a few minutes later and he felt calm.  He was still sweaty and annoyed, but all the destructive imagery in his mind’s eye had faded.  He changed lanes as quickly as he could and shot past that green fool at the first opportunity.  And then he shifted his mind onto the team he’d be playing against as well as whether or not he’d be able to tap into that slide-show of physiological combustion when it mattered. 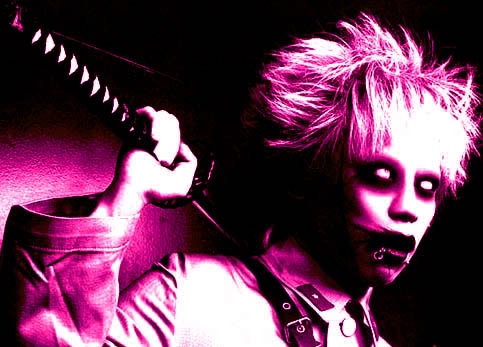