You know, the way cats push things off tables.

I watched the last four minutes of the game between the Atlanta Falcons and the New York Giants today.  Neither team won their first two games of the regular season, so a victory in the third game would be a moral and statistical boon.  I tuned into Fox right after the Falcons tied the score 14 to 14 with a touchdown (thanks to tight end Lee Smith) with just over four minutes left in the fourth quarter.  The Falcons won this one with a field goal at the very end of the quarter.  17 to 14.  Final score.

After sustaining a loss from the Carolina Panthers, the Atlanta Falcons would try to redeem themselves with a victory against the New York Giants.  Broadcast on Fox, the Giants began on offense.  Falcons cornerback Asante Samuel intercepted Giants quarterback Eli Manning two minutes into the quarter.  Shortly thereafter, Falcons running back Michael Turner maneuvered himself into the end zone for a touchdown.  The Giants responded with a failed field goal attempt.  Atlanta 7 and New York 0.  A series of stellar plays between Falcons quarterback Matt Ryan and his teammates (including Harry Douglas) led to Falcons tight-end Tony Gonzalez making a TD catch with less than two minutes left in the quarter.  Atlanta 14 and New York 0.

Three minutes into the second quarter, Falcons safety Thomas Decoud intercepted Eli Manning’s pass meant for Giants wide receiver Hakeem Nicks.  A TD did not result from  that turnover but a thirty-eight yard Matt Bryant FG did.  Atlanta 17 and New York 0.  Today’s game was decidedly much more encouraging to watch for Falcons fans as the top of the third quarter increased the Falcons lead with a TD courtesy of wide receiver Julio Jones.  Matt Bryant put up another FG with seconds left in the third.

Julio Jones and Matt Ryan connected for a TD in the bottom of the fourth quarter.   Where were these Falcons last week? No matter, shutting out the Giants for the entire game was nonetheless a lovely sight.  Atlanta 34 and New York 0.  Final score.

1.  Falcons wide receiver Harry Douglas engaged in “sideline salsa,” as the commentators referred to it, some time in the early portion of the third quarter leading up to a commercial break.  One of the cameras captured him from the back in a high-angle shot.  The movement of Harry’s hips and arms were reminiscent of the salsa side-step and some of this rhumba.

2.  With just under six minutes in the third quarter, Giants cornerback Corey Webster and Falcons wide receiver Roddy White got into a scuffle.  Both were given off-setting penalties.  Replay footage indicated (at least to me) that Webster instigated the brief rumble.  He shoved White; White responded with physical contact, but it looked more of “get back” rather than “bring it.”

3.  The Falcons’ game-play today was representative of the Falcons from the first ten games of the season: big plays, momentum, and

Super Bowl XLVI.  Lucas Oil Stadium in Indianapolis, IN.  The New York Giants vs. the New England Patriots.  Four years ago the Giants knocked down the Patriots by just three points.  Will they go for a repeat performance or will the Patriots take back the night?

Broadcast on NBC, with Al Michaels and Cris Collinsworth providing commentary, the forty-sixth Super Bowl started with the Giants on offense.  They didn’t do much but New England quarterback Tom Brady inadvertently helped them out with an intentional grounding of the ball, giving the Giants a safety.  Shortly thereafter, Giants wide receiver was cradling the ball in the end zone.  New York 9 and New England 0.

The Patriots got on the score board with a field goal in the top of the second quarter.  New York 9 and New England 3. By the end of the first half, the Patriots’ rhythm improved enough for a TD courtesy of running back Danny Woodhead.  New England 10 and New York 9.

The Patriots brought out their proper ammo with another TD in the top of the third quarter, though the Giants managed to shrink the score distance with a couple of field goals by the end of the quarter.  New England 17 and New York 15.

Two point difference…two point difference!  With just over sixty seconds left, Giants running back Ahmad Bradshaw unintentionally made a TD.  A two point conversion was not successful.  The Patriots had fifty-seven seconds to spit out a TD.  Tom Brady and crew came very close but in the end, New York 21 and New England17.  Final score.  The Giants have won Super Bowl XLVI!!!

2.  Are you excited about both the advancements in technology, execution, and feasibility of streaming the Super Bowl live?  Does it mean that all parties involved on the producing, distributing, and financing end have figured out a way to profit from such an offering?  And of course there’s an app.

3.  Patriots’ safety Patrick Chung is part Chinese.  His mom was a singer in Jamaica.  Chung is also a Korean last name but in this case it’s likely the Cantonese spelling of what would otherwise be romanized as “Zhong” or “Chong.”  If his Chinese name really is 鍾家庭, then his teammates could start calling him, “Chung Family.”  His first name in Chinese is literally “family.”

4.  Halftime thoughts.  Wow.  Madonna channeled Spartacus, Cleopatra, cheerleading camp, marching band, and candle-lit choir,  in her performance of “Vogue,” “Music,” “Give Me All Your Love,” “Open Your Heart to Me,” and “Like a Prayer.”

And for all of you young people who don’t know a lick about classic Hollywood, click on the actors’ name from the spoken word portion of “Vogue” for more information.

Greta Garbo, and Monroe
Dietrich and DiMaggio*
Marlon Brando, Jimmy Dean
On the cover of a magazine

They had style, they had grace
Rita Hayworth gave good face
Lauren, Katharine, Lana too
Bette Davis, we love you

Best halftime show I’ve seen this side of the 21st century.

* Joe DiMaggio was not an actor.^U^

5. I watched the 60 Minutes segment on Meryl Streep; I know people who don’t think she’s that big of a talent.  Although I can’t say I like her the way I like Keira Knightley, Cate Blanchett, Tilda Swinton, Charlotte Rampling, and Anna Mouglalis, I do like what she brings to the art and profession of acting. She’s got skills…and she’s stunning in a subtle way (and reminds me a lot of another actress, Jennifer Ehle).

6.  In my Youtube hopping tonight, I came across a clip of French singers covering “Ain’t No Sunshine.”  It made me wonder if Europeans singing in English sound any less accented than Asians singing in English.  Olivia Ong is from Singapore.  Ock Ju-Hyun and Hyori are Korean.  Girls’ Generation from Korea singing “Wannabe” vs. now defunct French group L5’s rendition.

The Atlanta Falcons scampered northwards to play the New York Giants.  Televised by Fox, and narrated by Daryl Johnston and Kenny Albert, the two teams talked business in sunny, fifty-three degree weather.  Back at home?  Definitely not sunny.  A bit rainy.  Once again, another visually splotchy telecast.  The Giants went on offense first.  Quarterback Eli Manning threw quite well…until the Falcons defense brought on the pressure and he threw a poor one (recovered by a fellow Giant).  Two plays later (methinks), he was intercepted by Falcons cornerback Brent Grimes.  What would the Falcons do with the turnover?  Would they show might? Pas beaucoup.  Nearing the bottom of the first quarter, the Giants punched out three points with a thirty-nine yard field goal.  New York 3 and Atlanta 0.

The second quarter bounced off to an offensive start for the Falcons–AND A RUSHING TOUCHDOWN BY RUNNING BACK JASON SNELLING!!!!  Atlanta 7 and New York 3.  The Giants returned the favor with a field goal that was no good.  No matter, Giants tight end Kevin Boss would run the ball in for a TD soon enough.  The Falcons had an opportunity to score again before halftime; a TD didn’t happen and neither did a FG.  With under two minutes left in the first half, Falcons quarterback Matt Ryan went down to the turf, the ball came out of his hands, and the Giants recovered.  Kevin Boss pulled up his team’s numbers just before halftime with a TD catch.  New York 17 and Atlanta 7.

The third quarter gave the Falcons something to smile about as Jason Snelling made his second TD of the day.  The Giants scored right back with a TD of their own, thanks to running back Brandon Jacobs.   The Falcons struggled to  get a TD on their next possession but took a field goal instead.  The scoring see-saw saw the Giants increase their lead with a TD catch by fullback Madison Hedgecock in the top of the fourth quarter.  New York 31 and Atlanta 17.  The Falcons proved in the second half of the fourth quarter that they’re still in the game with an Eric Weems TD.   New York 31 and Atlanta 24.  Two minutes left in the game…who would pass Go and Collect 200?  Falcons tight end Tony Gonzalez got his team closer collecting 200 by making a TD in the end of the end zone.  Both teams tied with 31 points.  On to overtime with the Giants receiving the ball and a thirty-six yard field goal attempt.  Kicker Lawrence Tynes won the game for his team.  New York 34 and Atlanta 31.  Final score.

So close and yet so far for the Falcons, but at least Matt Ryan didn’t throw any interceptions.  Without Michael Turner, they still tied the Giants.

Say hello to my Falcons Gnome.

1.  Daryl Johnston remarked towards the middle of the second quarter that “the Falcons don’t play to the whistle; they play just past the whistle.”

I spent the afternoon raking leaves.  I only watched a bit of the fourth quarter of the game where the Philadelphia Eagles served the New York Giants  a platter of buses.  The Eagles won 40 to 17.  Get game summary, stats, and play-by-play here.

I watched Big Fan (Robert D. Siegel, 2009) a couple months ago and reviewed it for FilmThreat.

Don’t let the premise of “Big Fan” mislead you. Writer-director Robert D. Siegel’s 2009 Sundance-approved dramedy indeed examines the fall-out of a hematoma-induced encounter between New York Giants fan Paul Aufiero (Patton Oswalt) and his favorite player Quantrell Bishop (Jonathan Hamm), but it’s not a football film. It’s not even a sports film. “Big Fan” is more accurately a romantic drama about loyalty and unconditional love that elects a Giants fanatic as its messenger… 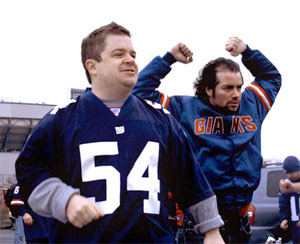 1.  Paul writes down his phone rants—his passion is thought-out.  He has a mobile phone but no regular or easy access to the internet.  This (conspicuous) absence of online activity is consistent with his character—he drives a mid-90s red Toyota Corolla—as well as the film’s grainy visual design, which gives the film a sense of timelessness.

2. NFL paraphernalia (particularly of the Giants and Eagles sort) is prevalent throughout the film, yet there is no game-play to be seen.  Paul and Sal listen to a couple of games on the radio and watch telecasts at the stadium, but the viewer is not privy to a single image from it.

3. My favorite line in the film: “There’s no way we can lose, not with us in the parking lot.”

© Sitting Pugs, 2007-2021. Unauthorized use and/or duplication of original material (textual or graphical) without expressed and written permission from Sitting Pugs is strictly prohibited.